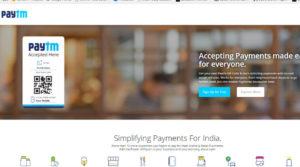 Paytm, founded in 2010 by Vijay Shekhar Sharma has revolutionized the concept of digital payment service in India, taking it to the masses. Paytm started as prepaid-mobile recharge website. Smartphones were just becoming popular in India and people were getting acquainted with the ease of use and various features offered by the app universe. This led to the growth of Paytm as it offered the easy facility for people to recharge their phones without having to visit the mobile phone stores. Being the oldest player in the online payment space in India, it had the advantage of a wider access to an existing customer base which the promoter leveraged upon by deciding to launch a digital payment wallet. The digital wallet helped reduce the steps for making payments without the need to go through various payment gateways optimizing the time and thus making payments a one click step.

Paytm’s success is in simplifying the user experience and that is where it has managed to create value for the customer at every step. Paytm has not devised any breakthrough technology but made use of existing technologies and integrated them on a single platform to offer the user the option to choose the easiest and convenient for a seamless experience. The existing Quick Response (QR) code technology has been used efficiently by Paytm to enroll small time retailers in the remote locations of India. The unique QR code can be read by the phone’s camera via Paytm app and the money is transferred to the rightful recipient. The use of this technology has opened several new categories for digital payments such as tolls, hospitals, diagnostic centers, canteens and parking among others. Toll payments at over 6,000 lanes across national, state and city tolls, has registered more than 20,000 transactions per day and aims to reach 2 million transactions per month by the end of this year.

Paytm has understood the pulse of the nation and has facilitated offline transactions considering the lack of steady internet connectivity in India. This mode saves customer details, such as balance in account in the background, and uses that information to close the transaction if either or both of the parties have loss of connectivity. For a payment platform like Paytm earning the trust of the customer is paramount for its success. This is an aspect that the company has ensured by adding security features like logout, fingerprint scanner and password protection for the app. All other features of the app can be seen via this link https://inc42.com/buzz/paytm-android-app/.

Capturing Value by Widening its net across categories

Alongside the surge of e-commerce in India with companies like Flipkart, Snapdeal and even global giants like Amazon and Uber looking to get a pie in the Indian market, Paytm gained further foothold by tying with these players getting enlisted as a payment option. The company expanded its service net by tying up with local e-commerce players like makemytrip (for booking air tickets), bookmyshow (for local entertainment) and IRCTC (Indian Railway ticketing). In February 2014, Paytm launched its website and mobile based marketplace and a seller dedicated app with zero commission model. With this move, Paytm entered the segment of the e-commerce players it partners with. Not entering directly into a competitive space directly helped it make a creeping and safe entry into another big arena to leverage its user base. How it achieved this, is by offering additional discounts to customers on the merchandise that they purchase on Paytm which can be credited to their Paytm wallet for any future service that wish to avail of on Paytm. This slow entry into various market segments has been a masterstroke by Paytm by reaching out wide at the right time, keeping its fort secure while scaling up quickly.

The Indian government’s move to demonetize the currency notes of INR 500 and INR 1000 and the granting of Payment bank license by the Reserve Bank of India, have lent a further boom to Paytm’s fast growth helping the company log 1 billion transactions in 2016. The details of their user-base data can be accessed from this link http://www.moneycontrol.com/news/sme/paytm-records-1-bn-transactions2016-user-baseby-45_8197261.html. The company which has garnered interest from the world’s largest e-commerce giant Alibaba which has taken its stake to about 40% in the company with a fresh funding of about $680 million at a valuation of 3.4 billion and from  Ratan Tata of the Tata group in India has disrupted the Indian digital payment ecosystem. It’s next battle in this space is with none other than the Government of India’s newly launched digital payment platform called BHIM (Bharat Interface for Money). How it partners with the Government in taking forward the inclusive growth agenda would be interesting to watch. For now, Paytm is following what it says to the consumer in its advertisement tagline “Cash in on every opportunity – Cash in on Paytm’.

Sweat with Kayla – the unstoppable growth of the Virtual Trainer

Nay on Waymo: A Prediction for the Self-Driving Car Race