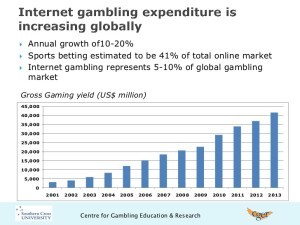 This value creation has led to huge growth in online gambling over time:

This shift coincides with increasing popularity of fantasy sports, exempted from laws restricting sports gambling as fantasy sports are considered a “game of skill.”  As such, daily fantasy sports (DFS) platforms have exploded – led by strong competitors FanDuel and Draft Kings.

There is one significant difference between these platforms and old-school booking houses like in Vegas: instead of playing against the house, daily fantasy sports are pooled against other users.   That means that scale is critical.  Direct network effects come into play in two primary ways to make the experience better for all users:

On the other side of the coin, FanDuel & Draft Kings benefit significantly from increased users.  Most notably, as a game of “skill,” gambling laws stipulate that the platform has to set prize winnings before a contest runs.  Even if a contest doesn’t fill up (thus falling short on entry fees), the site must still pay out the winnings – sometimes several millions of dollars.

Since users are critical to the platform’s success, competitors in the industry have gone to extreme lengths to capture players (and their dollars).  One hot promotion during the current NFL season is “matching” – the platform will match your purse contributions dollar-for-dollar up to $200.  That’s some extreme customer acquisition cost, but according to a FanDuel investor (Andrew Cleland from Comcast Ventures), “We know the lifetime value of a customer and it’s very profitable.” (Source: WSJ.com) Fun Fact: Yahoo Daily Fantasy, current laggard in DFS, recognizes the importance of gaining on the industry leaders and is offering 200% matching for new users…

FanDuel – my personal favorite platform – also captures market share through a creative referral program: they capitalize on their current user base by encouraging existing users to bring on their friends.   However, this isn’t any old referral program (although the referrer and referee do get a free $25 entry when they use a referral link*) – FanDuel ups the ante by sharing revenue for referrals.  This is how it works:

FanDuel actually gives away up to 35% of profits using a tiered payout:

It treats your referred friends as “recruits” in a system very reminiscent of the old school Mary-Kay format.  Each user is highly incentivized to bring on new users and encourage them to spend $$ on the platform each week. 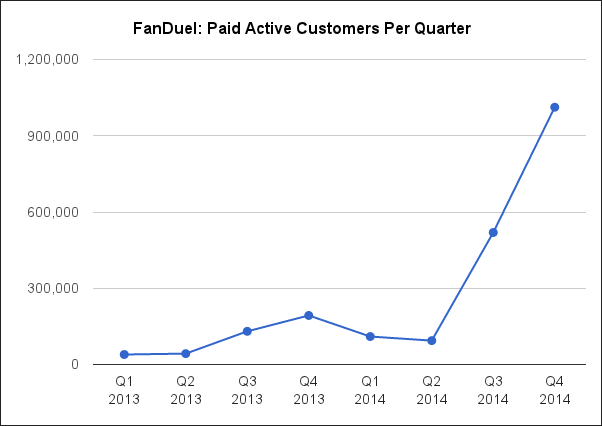 These creative customer acquisition techniques have proven successful for FanDuel.  User acquisition and revenue growth has grown dramatically – helping them garner $363 million in outside investment at a valuation of over $1 Billion!

But there is a dark side to network effects in DFS, rarely noticed by the average player.  There is diminishing value in additional players after a certain point: you want enough other players to ensure contest variety, but not so many as to make the contests too difficult or competitive.

In fact, this dynamic has led to a proliferation of professional players – or sharks – who dedicate $100,000+ each week into a diverse number of contests.  The sharks use advanced algorithms to identify valuable players or matchups and enter head-to-head contests against other players.  Sharks are thrilled by many new novice users with less skill who they can easily take advantage of.

When evaluating the ecosystem, it turns out that the sharks are the players that win money – and over time, novice users will generally lose (source: Bloomberg).  Shouldn’t losing players leave the platform, resulting in attrition that hurts network effects?  FanDuel and Draft Kings are attempting to prevent this trend by limiting certain players, but only time will tell how effective it will be…

*In the meantime, you should probably sign up for FanDuel with this referral code 😉

GoPro – A Platform Worth $3 Billion