Lego is one of the world’s most recognizable brands and has been in business for 85 years.[i]  But while The Lego Group has a long history, it’s not a company that’s stuck in the past.  In recent years the company launched its Lego Ideas Platform which is giving its biggest fans a say in the future of their play.

The Ideas Platform allows users to join an online community of nearly one million fans.[ii]  After becoming a member of the community, users can submit their own ideas (usually consisting of a picture of a model that they’ve built using their own Legos and a short description).[iii]  They can also choose to “support” (i.e. vote for) ideas that have been posted by other community members.  If an idea garners 10,000 supporters, it is assessed by the Lego Review Board and may be produced into a real Lego set to be sold to the public.[iv]

Lego incentivizes participation in a few ways.  The most tangible incentives arise if a community member’s idea is produced into a sellable product.  In those cases, the creator receives a 1% royalty on worldwide sales in addition to being identified in the set materials as the product’s creator.[v]  While enticing, I think those incentives are irrelevant for most of the community members that post ideas.  Many ideas expire with less than 1% of the necessary support to achieve an official review.  However, even in those cases the ideas are often viewed by anywhere between a couple hundred to a few thousand community members and can garner up to a few dozen comments (see examples pictured below).[vi]  Thus, I think the primary incentive to participate on the platform is the ability to show off one’s work and garner praise from other like-minded individuals.  Lego building is often a solitary activity, so the opportunity to share one’s creations with others who will appreciate them is very valuable to these users.  Thus the platform creates value through a combination of the vast number of incremental product ideas that it yields and the increased sentiment of brand love that results from the interactions between community members. 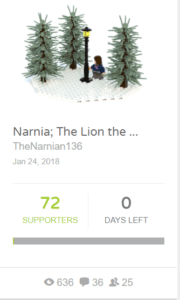 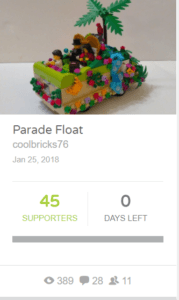 Lego captures value from the Ideas Platform in a couple of ways.  Some of the ideas conceived by the community will lead to new products that Lego will sell to consumers (in a typical year four new products come from the platform).[vii]  If a community member conceives of a hit new product which resonates with community members on the platform, then paying just a 1% royalty seems like a great deal for Lego.  Furthermore, Lego can spend much less on marketing those crowd-conceived products because of the hype that develops throughout the crowdsourcing process.[viii]  In addition to the products that emerge directly from the platform, I would imagine that Lego is gathering a lot of data as to what sorts of ideas are being posted and garnering support and using that data to inform some of their internal product development efforts.  Overall, the more Lego can be tuned in to the ideas that are exciting their most loyal fans on this platform the more the company can reduce the odds of producing products that flop in the market.  Additionally, the positive community experience will likely lead many community members to spend more time and money on Lego products.

Crowdsourcing efforts typically come with some degree of concern as to how the company can manage the crowd.  Lego is able to achieve this by keeping their tangible promises to a minimum.  Achieving 10,000 supporters for an idea garners an assessment by the Lego Review Board, not a guarantee that the product will be produced.  In this way Lego can reject any ideas that they believe to be bad for the business.  Of course, they must walk a fine line so as not to anger the community.  If many ideas are reaching the 10,000-supporter threshold and none are being chosen to move forward, the community may start to lose faith in the process.  That said, I believe this model works because most community members aren’t contributing with the goal of financial reward but rather to engage with others who share their passion for building.

The LEGO Group achieved nearly $6B of revenue in 2017 (up nearly 40% since 2013).[ix]  And with their most devoted fans expressing their brand love in a thriving online community, providing powerful data, and conceiving some of the company’s future products, this iconic company is poised to find continued success as it enters its second century of existence.

Crowdsourcing Your Next Chip Flavor: Lay’s “Do Us A Flavor” Campaign

Student comments on Building Together: How LEGO leverages crowdsourcing to sustain both innovation and brand love