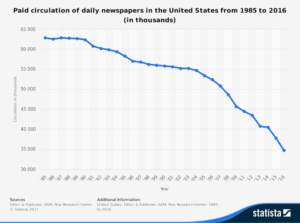 It’s no secret that newspapers in the United States are a dying industry. Circulation growth has been negative since the 50’s as television and then the internet became the preferred source of news for the average reader. This acceleration has increased in the 2000s as more and better reporting has come online and consumer attention shifts from broad national/global stories published once per day, to a 24-hour news cycle tailored to individual preference. Previous attempts by newspaper companies have not been met with large success, and paywalls have consistently been a difficult hurdle for consumers to get over.

Bezos’ focus appears to be primarily technology focused. Similar to his strategy with Amazon, the back-office functions of the business have been brought to the top of the priority list. Bezos appears to be developing the technological backbone of the Washington Post to be deployed to multiple other papers that are looking to go digital first, similar to how Amazon pioneered the cloud computing model under AWS. Arc Publishing, is effectively a turnkey digital publishing solution, including a full analytics package to supercharge digital subscriber growth through an effective paywall campaign[1]. Bezos has been using the Washington Post as his testbed for developing what the Washington Post predicts could be a $100mm business[2].

Second, Bezos has dramatically increased the number of reporters that are developing digital-first content, effectively making the Post a digital-first paper. According to the Washington Post, they produce roughly 500 stories per day, double that of the New York Times, with a dramatically smaller news team (700 vs 1,300 employees). This volume of digital publishing doubles digital only giants such as Buzzfeed[3], while maintaining a high level of credibility[4] uncommon to digital publishing.

This focus on digital has certainly seen success. In November of 2015, the Washington Post first eclipsed the New York Times in terms of digital views according to ComScore[5]. This gap has continued to widen as the Washington Post has been able to make massive digital view gains month over month, translating to large growth in digital subscriptions as well. From 2015-2016 digital subscriptions grew 145%[6] topping 1 million subscribers in 2017. The Washington Post was able to do this through a comprehensive distribution strategy involving a massive push through Facebook Instant Articles[7], and second through a free 6-month trial subscription through Amazon prime[8].

These changes seem to have been positive for the Post, their back-end digital publishing system is getting traction with key customers such as the Los Angeles Times, Canada’s Globe and Mail, and the New Zealand Herald[9]. The News Room is increasingly seen as a marquee posting[10], and the paper has been profitable for the past two years[11]. Something that could not be said while it was under the control of its former owners, the Graham family. Hopefully, this upward trend can continue, and the newspaper industry can look to the Washington Post as a positive example of how to make digital work while the traditional pulp and ink model continues to decline.

WeChat: A winner in China but a loser abroad

In a Digital World, PTC is a real winner.

Student comments on Bezos, The Digital Midas. Turning Around the Washington Post