AT&T is the world’s largest telecom company in terms of market valuation. The company’s first corporate structure was started by Alexander Graham Bell himself, after having invented the telephone. Yet, today its prospects are lackluster and its challenges numerous.

Imagine an industry where for more than a hundred and twenty years, the bulk of the value was in connecting individuals. Then, over the course of a mere decade, the former kings – amongst which AT&T stood atop – found themselves disintermediated by new firms controlling the value-add information flowing through, thus rendering Telcos “dumb pipes”. From the perspective of AT&T and other telecom carriers, the so-promising digital revolution they underpinned was now changing the rules of the game at their expense.

At the heart of the discontent of Telcos, was the perceived notion that Big Tech was venturing into the telecom space, after having disrupted many other industries. The carriers and ISPs were being threatened in their very business model. With free services and products, Big Tech firms were accused of having significantly destroyed telecom margins. In the past decade, it has become impossible to charge people 20 cents per text, when a customer can use Facebook Messenger and WhatsApp free-of-charge as included in their data plan.

While these revenues were dwindling, maintenance costs were going through the roof, in order to support a network that sees terabytes of data flowing through, the bulk of which was controlled and monetized by Big Tech. For instance, a YouTube video watched on one’s phone, generates revenue for Google, and unit-economics’ costs for AT&T that has to “deliver” it to its customers. Unsurprisingly, this only increased tension between Telcos and Big Tech firms, adding a new layer of discontent to the already-contentious net-neutrality battle.[1]

This tension escalated when Big Tech firms decided to become high-speed Internet (e.g. Google Fiber and Facebook’s Internet.org) and mobile network providers (e.g. Google Fi), thus directly attacking AT&T and other Telcos on their legacy business. In a sector where large early investors have felt the pointy end of the market’s boot for a while, the new headway made by Big Tech on internet infrastructure was met with wariness and suspicion.

Having definitely seen better days, this is what led the Telco sector to be dubbed the “poor stepsister sector in TMT”[2] (see Exhibit below). 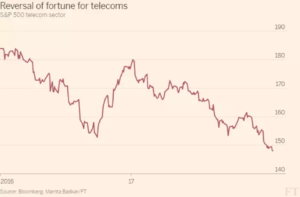 Having been enduring this for a while, AT&T’s recent bid for Time Warner is most likely a direct reaction to the power of Netflix and Amazon. Bleeding customers to over-the-top services which it doesn’t control, AT&T’s management has been trying to appease the markets with a new strategy built on mobile and digital entertainment, or put more simply owning content and distribution at the same time. This strategy, a far-cry from AT&T’s traditional business hinged on new expensive acquisitions.

In what the WSJ described as a “seismic shift”[4] for the media and technology industries, this deal could transform AT&T into a media titan never seen before. This transaction – if allowed by regulators – brings into perspective the most important trait of the digital revolution in Telcos: the push from internet access providers to gain control on the content they once obediently carried.

However, what some imagine to be a historic deal that will transform the old carrier, could very well turn into a “white elephant” for AT&T. On the one hand, AT&T would inherit a business churning revenues of $ 28 billion a year, owning brands such as HBO (including its star show Game of Thrones) to CNN and Warner Bros. On the other, this desperate move might seem better in theory than in reality. Marrying content and distribution has very little industrial logic, especially at a price tag of $ 86 billion. Furthermore, such an entity would suffer extended scrutiny from regulators for fear of anti-trust violation. All the while, AT&T still undergoes the same dwindling economic fortune of the telecom industry.

Watch out! Airbnb is near by!

Will the innovation of e-cigarettes erode NYC’s public health gains from anti-smoking policies?

Student comments on AT&T: from baby Bell to dumb pipe ?