The sport industry is at a critical juncture. Over-the-top media platforms allow fans to stream sports content anywhere they go, making one’s couch a more enticing way to watch than the metal seats and long lines. For years, industry executives touted sport as the last holy grail for live entertainment, using this argument to prop up sponsorship deals and infrastructure projects. The premise in these deals is that viewers will opt to watch their favorite sport teams live rather than time-shifting through a DVR; and that public subsidies provided to build a new stadium will be rewarded through the economic development from thousands of fans packing the venue to witness live moments first-hand.

Recent data show weakness in these arguments, however. While there are certainly bright spots, the NFL, MLB, Premier League, and women’s college basketball have all seen viewership or attendance decline. In October, baseball and media executives alike were scratching their heads over lower ratings for the World Series, despite two large market teams making the final.

There are many factors contributing to these challenges — from the high cost of organized sport to the rise of esports. Studies show that the number of kids playing sports in the United States is decreasing. Meanwhile, esports’ humble beginnings as a gaming niche has evolved into a massive market. Consumers are watching esports competitions in greater numbers than ever before, and the $700M market is expected to double by 2020.

“So, what are team and venue owners to do? One thing is for sure: to future-proof, they must embrace technology as a matter of survival.”

So, what are team and venue owners to do? One thing is for sure: to future-proof, they must embrace technology as a matter of survival. Venues, in particular, will face significant challenges with putting “cheeks in the seats” if they’re slow to adopt technology that the fan of future now requires.

Sports Innovation Lab, is a market intelligence firm powered by data. SIL analysts have evaluated thousands of data points about venues to determine best practices for “smart venues” — those that are using technology to deliver a strong fan experience. There are three main areas venues should focus on to remain a viable entertainment option for the fan of the future: speed, security and sustainability. The good news is, whether the venue was built in 1912 or 2012, either can be smart (see figure). 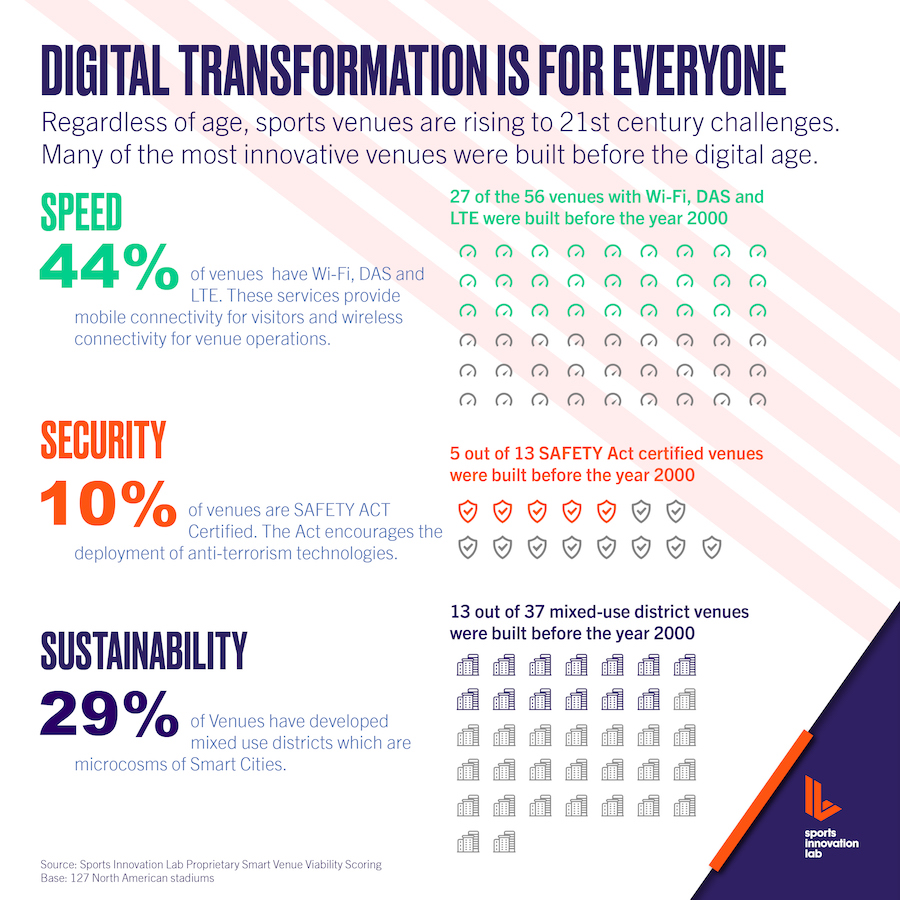 The need for speed

In-venue data consumption is increasing 70-80% depending on network, with social media activity responsible for 30% of total data use. This often leads to connectivity issues and impatient fans struggling to load social videos. Venue operators and staff also feel the pain as they try to expand their menu of mobile services, support POS devices, and offer immersive experiences. Venues must not only supply fans with Distributed Antenna Systems that boost mobile connectivity, they must also provide WiFi to power their own operations. Without network speed, however, none of these improvements can be achieved.

Yes, the cost of innovating network speed may seem high, but the reward goes beyond an improved fan experience. It’s also the tremendous amount of free marketing resulting from this data consumption. For example, in 2017, Camp Nou’s “Estadi Conectat” project equipped its stadium and surrounding area with 1,500 Telefonica antennas to improve Wi-Fi connectivity. This free Wi-Fi allowed the stadium to set the record for the amount of content downloaded from the internet by users during a sporting event (7.07 Gbps), doubling the previous record set at the Super Bowl.

Increased bandwidth can also lead to more in-venue mobile purchase conversions. Norway’s Telenor Arena cut the amount of time it takes for fans to get a drink from 5 minutes to 90 seconds. The mobile-first, cashless arena leveraged LiveStyled’s app to create app-only bars where customers could pre-order and pick up their drinks. Similarly, the Orlando Magic let fans use Magic Money currency via their mobile app to pay for seat upgrades, buy additional tickets, and purchase experiences like attending the post-game press conference.

Securing “who” and “what” is in the venue

Unfortunately, venue owners do not know who is in their stadium. The secondary ticket market obfuscates the link between ticket purchases and actual attendees. Facial recognition technology and fingerprint scans can help by authenticating identity and keeping banned individuals from entering, but most fans still want an option to be able to sell tickets they can’t use. And now, another concern for owners is “what” is in the stadium. Smart venues must evolve their incident management protocols to address emerging threats, such as from drones.

One way smart venues confront security issues today is by using tech focused on a ticket’s chain of custody. For example, by using Ticketmaster Presence, Orlando City was able to provide digital access control and increase the number of known fans by 398%. Companies like Aventus and Guts.Tickets are attacking the problem of ownership with blockchain; they believe this technology can help verify identity and cut out price inflation from the secondary ticket market.

Access management technology further helps identify who is in the stadium. With the goal of reducing altercations, Centenario Stadium in Uruguay engaged Herta Security’s facial recognition technology to screen for banned individuals. The success of this initiative resulted in two more stadiums implementing the tech. MLB, meanwhile, is embracing biometric access management through their partnership with CLEAR, similar to what we see in airports.

Even as new physical and virtual threats like drones grow, there are tech solutions emerging to combat them. The Commonwealth Games in Australia equipped their security personnel with anti-drone guns that could jam the signal of a drone, disabling the operator’s control and mitigating the risks of a cyberattack in the process.

Sustainability — It takes a village

For venues to stand the test of time, they must consider what is happening both inside and outside of their arenas. Entertainment districts are rising to the challenge by creating spaces designed for multiple sports and events, not just one draw. This customization comes at a cost; providing incredible light shows and immersive experiences are not cheap, but venues hedge through the tech-enabled reduction of energy, water and plastic consumption. Venues also strengthen their durability by enmeshing themselves in the city around them through mobility and connectivity initiatives. The sustainable venue is efficient today, relevant tomorrow and brings value to its community.

A packed stadium results in high utility usage, including water for the bathrooms and energy to moderate temperatures. New venues have an advantage when it comes to utility consumption, as they can build with newer technologies as opposed to retrofitting existing ones. Yet both are possible. For example, the newly constructed Mercedes Benz Stadium reduces water consumption by capturing rainwater runoff in a 680,000-gallon cistern. The water is then used to irrigate the field. Building an ice-rink in the warm Los Angeles temperature is a utility nightmare, so the LA Kings partnered with BlueEco to make ice that is clearer and consumes less water. The Kings also optimized internal air flow so they didn’t need to keep the arena at sub-arctic temperatures, a win for fans and their utility bill.

Being able to utilize a venue for more than one type of event can dramatically add to the bottom line. These mixed-use venues are the new normal, but efficiently switching the layout is just as important.

To host soccer and football on the same field, the Tottenham Hotspurs Stadium developed a retractable pitch that has real and synthetic grass options. Changing the pitch takes only 25 minutes.

Venues take up a lot of real estate, so it’s important that the community benefits from them physically as well as financially. The LAFC is working with the city to expand bike path access to the stadium in conjunction with the city’s My Figueroa urban development initiative. In another example, a sponsor of the Fiserv Forum, Johnson Controls is partnering with the Milwaukee Bucks to build initiatives that benefit the broader community of Milwaukee residents.

The fan of the future is waiting…or not

For Smart Venues, innovation often starts with improving process efficiency and infusing technology into existing practice behind the scenes and out of the view of the fan. This creates the ability to deliver fan-facing innovation like exciting content for the jumbotron and interactive experiences. Venue operators that focus on refining their speed, security and sustainability will create venues that adapt to the future, create a safe environment, and interweave themselves the in surrounding communities.